Dr. Rayher is a San Francisco Bay Area native and grew up in Santa Rosa. He earned a bachelor of science degree in bioengineering from the University of California at San Diego and was elected to the prestigious engineering honor society, Tau Beta Pi.

Moving back to the Bay Area, Dr. Rayher earned both Doctor of Dental Surgery (DDS) and Doctor of Medicine (MD) degrees at the University of California at San Francisco. While a student, he was active in student government and served as the Student Body President of UCSF.

Upon graduation, Dr. Rayher was inducted into the Alpha Omega International Honor Society, which is reserved only for dental graduates who rank number one in their class. He was also inducted into the exclusive Omicron Kappa Upsilon Dental Honor Fraternity.

After obtaining his degrees at UCSF, he continued his training at the UCSF Medical Center, San Francisco VA Hospital, and San Francisco General Hospital where he learned firsthand from some of the most renowned doctors in the country. He earned a Specialty Certificate in oral and maxillofacial surgery, which included formal training in general surgery, micro neurosurgery, and anesthesia administration. Dr. Rayher is licensed to practice both dentistry and medicine and holds California state specialty permits in oral and maxillofacial surgery and general anesthesia.

After completing his training, Dr. Rayher was appointed Assistant Clinical Professor at UCSF and teaches in the dental school once a week. He currently maintains a private practice at Union Square Oral Surgery & Dental Implant Center in downtown San Francisco. Dr. Rayher is a member of numerous professional societies, including the American Association of Oral and Maxillofacial Surgeons, the American Dental Association, the American Dental Society of Anesthesiology, and the Academy of Osseointegration.

With his expertise in oral and maxillofacial surgery, medicine, and anesthesia, Dr. Rayher has particular interest in helping fearful and dental-phobic patients, especially patients who need removal of impacted, diseased, painful, or infected teeth, patients in need of jaw reconstruction with bone grafting, and patients who need replacement of missing teeth with dental implants.

Request Appointment
To request a consultation and learn more about how we can help improve your smile, please request an appointment now. 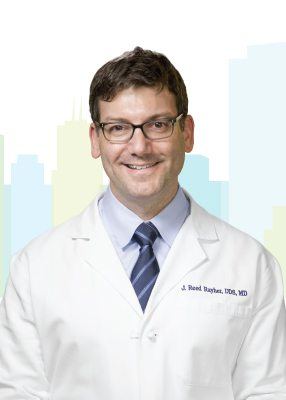